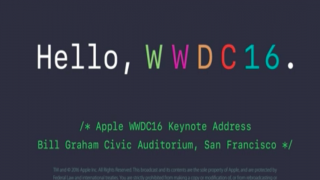 Like every year, Apple Inc. announced some big changes and features across their operating Systems. To start with the streamlined the names and finally all the operating systems or OS look this way:

It was definitely not just a name change but Apple seems to be in a hurry for the first time in many years. Or else announcing so many features (coming ahead) at ones is just not Apple! It feels Apple is facing pressure from Global slowdown, particularly in Smartphone demand. One more thing that was very different this time around, China! China was always an important market for Apple but yesterday suddenly China was mentioned about 4 times along with ride-hailing service Didi. (Read about Apple’s latest investment in Didi). If this was not enough, Apple has also included mandarin in its iMessage’s new feature: “Write it yourself”.

Following are some of the new features in every OS:

With ios, 10 Apple is taking Chatbots and Artificial Intelligence very seriously. It has introduced a lot of fun features which have been borrowed and modified from Snapchat, Whatsapp and Facebook’s messenger. But made them more intuitive and user-friendly, typical Apple way. Emoji have become a lot more intuitive and throws up suggestions while typing ! Personalised photo sharing with editing features which closely match with those of Snapchat, Stickers with 3rd party apps installed right onto messenger (this in itself is a very big announcement, as Apple has already announced imessages are open for developers now). – See more at: https://www.fidigital.com.au/apples-wwdc-16-announcements/#sthash.NeOEJtrI.dpuf

This opens a whole lot of possibilities and many companies have already tested waters with FB messenger and might just adopt the same strategy here in imessage. Social buying/shopping and ordering food in groups are concepts which might see big boom now. Also health & fitness tracker, betting apps and Fashion renting as well as selling business models will start growing in this micro-ecosystem.

In my previous blog post on Mobile Search’s Future, I had predicted same things and I can see them coming to life and in public domain. This space combined with Apple Pay’s Online version which got introduced can almost finish your purchase without even leaving your imessage app. Now this is really big!

If implemented well, this can cut into the share of “time spent” on Snapchat, E-commerce websites & apps, Whatsapp, and FB messenger. What does work in the favour of previously mentioned platforms is their universal adaptability, whereas imessages are confined to Apple’s ecosystem!

Apple has made Siri more intelligent and also opens it to the developers, same concepts of mobile friendly search & AI that apply to chat also apply to Siri. While showing demo, it was learnt that Uber, as well as Lyft (USA based Ride-hailing services), are already geared up with adapting Siri.

So next time you need to book Uber, just call Hey Siri. Now this can be big, really big if adapted well. In essence, what Apple is doing, is quite simple. Keeping its loyal force webbed into its ecosystem. Book Uber using Siri, Pay it using Apple Pay.

It’s all about cultivating habits and Apple is really good with it. Don’t be surprised if one fine day Uber or any of its competitor might have to pay Apple to stay as their default ride-hailing option on Siri. (Just like what Google does on Safari). This is Apple’s power which none of their competitors would deny! It’s Brand Loyalty

Maps can do a lot more. Predictive along your route, gives traffic alerts and can also book rides and restaurant tables for you. That’s quite intuitive, isn’t it? Well definitely yes but in this case as well, the obsession with Ecosystem is quite visible. And there’s nothing wrong with it. Every tech giant is doing this, Apple has to do this anyway because it is a leader in this space.

Other notable features on ios 10:

Siri is not just added but also adapted in mac environment wherein a user can keep working on other stuff and ask Siri to do something simultaneously. Have a look at an example below.

There are many features in this OS update which were once just imaginable.

One feature that stands out, though, is Optimized storage. This seems to be really handy and will by default make more storage room every time. Graphics below from Apple explains it all:

Apple watch has always been confusing for me to understand. Apple is making it efficient and in this release, very fast and efficient. Moreover allowing developers to use Siri & imessages have bigger and better implications here on Apple watch. With a small screen, voice and a small chat window can work wonders if connected with other apps.

It would almost serve as an interface to connect or command other apps. All this looks good but what about cannibalisation? Apple historically never worried about this and looks as if it’s going to ignore it for now.

While it is empowering Apple watch and iPhone, it’s planning for iPad doesn’t look very promising. I believe iPad would be more of enterprise use and/or for artistic designing (with the introduction of Pencil and iPad Pro). And it’s common sense if people can do almost everything with their iPhones and Apple watch, very few people would upgrade their iPads and even fewer will buy it for the first time.

Coming back to watchOS, the big announcements are worth it. With 7 times faster app launching, it’s definitely going to be fast, really fast! Moreover, the variety of watch faces has increased with a simpler way to change them which is handy, not a great feature but a handy one.

I believe Apple is staying true to its purpose behind the watch. Collaborative health and fitness tracking which will expand to other areas sooner or later. While Fitbit started this prior to Apple, it would be interesting to see how this new added feature work.

One big limitation again is Apple’s ecosystem, which makes it compulsory for your fitness buddy to have iPhone and Apple watch. If this feature is opened to other applications, it would prove a game changer. Though there was a mention about this in the keynote, there is still some ambiguity around this.

This feature on Apple watch required a small separate mention because it can be very handy. The country doesn’t matter, this device can automatically call emergency services depending on geolocations. And having it on your wrist is very powerful. It almost feels as if we are living in sci-fi films of the 90s.

What’s in store for SMEs ?

After going through the features, it’s time to understand how these changes will affect the digital marketing landscape. Apple pay for the web will surely need big and quick changes on every e-commerce platforms. Apart from this SMEs will have to take a holistic view about the digital marketing strategy and understand the power of handheld devices.

This also has implications on our patience levels, which is already reducing and millennials want everything with a click on their flashy smartphone screens. And to be able to serve this generation, businesses need to be agile and adopt changes fast. For example, if your business is in direct to consumer space or in fast moving goods, it is essential to have a mobile website designed and focus on Mobile Search Optimisation. Increased focus on developing social buying and chatbot technology will also yield better results and keep you ahead of the competition.

You can discuss your case with us, we would love to advise SMEs on all the possible options after getting acquainted with your cases. Just drop in an email on support@FiDigital.com.au or fill out this form.

At FiDigital you can be rest assured about the changing times, we will keep you ahead the curve every time. Till next time, take care! This post was brought to you by FiDigital, Melbourne-based Digital Marketing Company. Helping SMEs in their Digital growth and guaranteeing success as well as transparency.